If you need a really smart method to learn German prepositions, here is what you´ve been looking for

Trust me – you´re not alone with your troubles. There are many others who have to learn German prepositions, and from my own experience as a teacher of German grammar I would say that it is a real struggle for almost everybody.

The biggest problem here, is that prepositions are rather abstract. Moreover, there are no evident signs for which case to use with prepositions!

Of course there are many prepositions; here I present the most important ones, which will already take you a long way.

After the first 6 months of learning German, you should at least know the following prepositions:

Two-way-prepositions. These can use the dative as well as the accusative:
hinter, an, neben, auf, unter, zwischen, vor, in, über

Probably you will have learned it more or less this way: 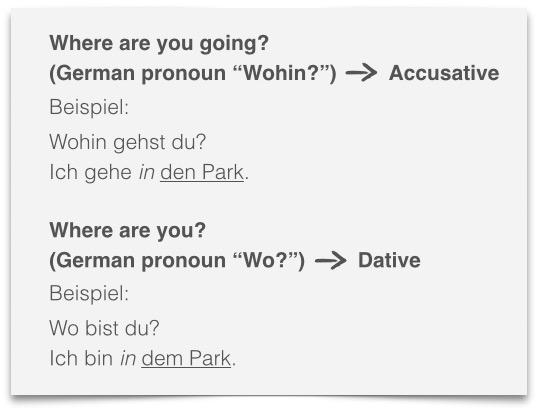 Most students find the matter of German prepositions of change difficult. Why? Because it’s simply too abstract and there´s too much information.

However, you´ll see that you can learn all this in a much easier way

Let´s get started with songs

I’ll show you how it works with songs by means of an example with the accusative prepositions. Here they are once more: durch, bis, für, ohne, entlang, gegen, um

Choose a song, that you like and whose melody you can easily remember. In principle, it could be any song.

Then arrange these German prepositions in such a way that you’re able to sing them to the melody of the song. In my example I provide a bit of solid German culture and choose the folk song “Laurentia” as my base song. If you ask your German teacher, he or she will know the song :)

To be able to sing the prepositions to the melody of the song, I have rearranged them and built in the accusative-information at the same time. Now it looks like this:

You can then do the same for the dative prepositions and the two-way-prepositions. Choose a song, arrange the prepositions according to the melody, add the case rule – and you will see, that it is easier to learn which case is used by these German prepositions.

Is this too much work for you? Don’t you fancy singing yourself? No problem! I have already taken care of  that for you. You find the accusative-song and two more songs all in the POWER-Learning-Kit „Learning German with Mnemonics“.
But why did I write the accusative prepositions in blue?

Colors can be powerful aids, when dealing with the comprehension of the German case system. Especially in connection with the prepositions, with the help of colors one can bring a lot more clarity and comprehension to the chaos.

Use blue for the accusative and red for the dative. Why exactly these colors? In principle, you can, of course, choose other colours. I have chosen these colors for the “German grammar POWER-Learning-Kit” for a certain reason and with this I have developed a vast system. But that would lead us too far at this stage.

OK, now write all the accusative-prepositions in  blue in your vocabulary-notebook or – even better – on your flash cards. You’ll memorize the color quite quickly, and it will be easy to remember that these prepositions use the accusative.

Now, do exactly the same with the dative-prepositions, but make sure to use  red.

How powerful the use of colors is, is shown with the two-way-prepositions. To start with, you have to use two colors while writing them down, red and blue. How you do it, is up to your creativity. It could look like this for instance:

And now we use colors in combination with mnemonic images

If you´re already inspired by the use of colors with the learning of German prepositions, you are going to be swept off your feet in a second when you see the power of colors in combination with mnemonic images. Here you see an example for the preposition “hinter” (behind): 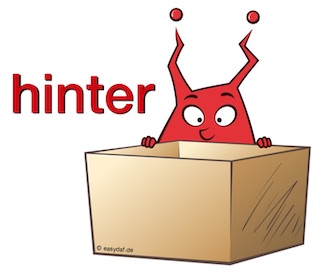 Now, guess which case has to be used here?

I bet you clicked correctly on “DATIVE”, didn´t you? You see at the first glance that it is about a position. Moreover, the dative is integrated in the image by the color red.

Just as you can see immediately in the next image that the accusative follows the preposition “hinter” (behind).

I think, I know what you’re wondering now:

Are there more such images? How much simpler would it be to teach or learn German prepositions using mnemonic images? This way it’s a lot more fun, isn’t it?

I am happy to tell you: “yes”. Such pretty mnemonic images exist for all the German two-way-prepositions presented here, and they’re even available as posters, in A4 paper format! Moreover there are, many more mnemonic illustrations which will make your learning of German grammar a lot easier. And, yes, it doesn’t matter whether you’re a student or a teacher – it’s a lot more fun for everyone!