But first of all: What is special about German irregular verbs?

Irregular German verbs or „strong“ verbs, as some people call them, are distinguished from so called „weak“ verbs, or, regular verbs.
For people who want to learn German it is usually really hard to learn those irregular verbs, because they change their stem vowel in the past tense (preterit) and perfect tense. Well, I know; so far it sounds a bit too abstract …

You can see that with these verbs the vowel of the verb stem always stays the same. The verb “lernen” (to learn) has an “e” in all three forms. The verb “machen” (to make / do) always has an “a”.

The irregular verb “nehmen” (to take) changes its stem vowel as well in the preterit tense and in the perfect tense.

Regular/weak verbs or irregular/strong verbs? How can you recognize them?

Of course, your German teacher will tell you whether a German verb is strong or weak, but surely you want to be able to find out yourself. For this you urgently need a decent dictionary. With this I mean one that is appropriate for you as student of German. If you’re really serious about learning German, you’ll have to have in any case a monolingual dictionary in addition to your bilingual dictionary. And indeed  one, which contains all the information that’s important for you!  A simple German spelling manual is certainly not sufficient.

What you need, is a so called „Wörterbuch für Deutsch als Fremdsprache“ (dictionary for German as a foreign language).

In this recently published dictionary “Wörterbuch Deutsch als Fremdsprache”, you find all the information you need to learn a correct German

For example, the regular verb “ordnen” (to order) presented is in this dictionary in the following way:

On the right side, you see an explanation, which is brought shown with the verb.
Irregular verbs are in principle presented in a similar way, you just  have to make sure that you change the stem vowel.

Have a look yourself at an example of the same dictionary for the German irregular verb “essen”:

It’s very, very important that you’re able to look up this information, otherwise you won’t know whether you’re learning correct German or not. The problem with this is indeed, that it is very hard to learn this information. You have to write the corresponding verbs on cards in each case, and repeat the forms of the preterit tense and  the perfect tense (participles) very often in order to learn the “Ablaute” (vowel gradations). I can tell you, this is one of those common situations, where the students ask their teacher: HOW can we learn this? And it is guaranteed  the teacher will answer:

„No idea, you simply have to learn it in some or other way!„

That’s certainly not what you want to hear! OK, with a bit of luck, you’re given the advice to use cards. That’s all very well, but most likely you want a method, with which you can

… and not in some or other way, but with a system – so that you DON´T HAVE TO REPEAT THINGS SO OFTEN! All well said, but how is it done?

Now, most of the time in dictionaries or in German lessons you will find an example-sentence together with the verb, so that you understand exactly what it means.

For the irregular verb “essen”, for instance you will find this example-sentence in the dictionary: “Sie isst kein Fleisch.” (She doesn´t eat meat) And: “Was gibt es heute zu essen?” (What are we having for lunch today?)

That’s all very well, but it doesn´t help with learning the vowel gradations of these strong verbs.

That’s where the mnemonic example-sentences come in!

Mnemonic example-sentences contain a mnemonic keyword, or a memory-trigger, which will help you to remember the vowel gradations while  learning the strong verbs. Here is an example for you: 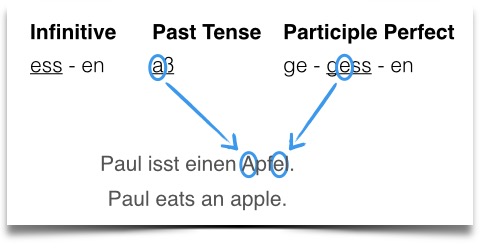 As you can see, the word “Apfel” is our mark-word. The mark-word can be any length you want, the important thing is that the two first vowels remind us of both vowel gradations of the irregular verb.

So if you can remember the mark-word of your example-sentence, which should be a lot easier to learn by heart than the abstract information in the dictionary, then you will automatically know the form of the verb in the past tense and the perfect tense (past participle).

You could easily enhance the mnemonic effect by using even a second mnemonic keyword additionally to the other one. Make sure that the first two vowels of it must be the same as in the other keyword. For example, we could use the word „Affe“ (monkey) for the subject. Now our example sentence would look just like this:

And here is another example for our second verb “nehmen”: (to take) 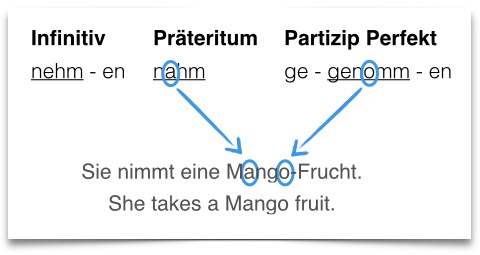 Here as well you can see that the verb changes its stem vowel in the 2nd and 3rd person singular, from “e” to “i”. Our mnemonic key-word this time is the “Mango-Frucht” (mango fruit). As soon as you can remember this mark-word, you will know instantly which are the vowels of the two other forms of this irregular verb.

In a second step you should try to visualize your example-sentence. Don’t worry, you don’t have to be able to draw. It’s a lot more important that you use and practice your creative fantasy! Brain research has proven the following:

An intense imagination has just the same effect on our brain as a real perception!

We’ll try this with another example, with the irregular verb „reiten – ritt – geritten“ (to ride – rode ridden).

An example-sentence in your mental visualization could look a bit like this: 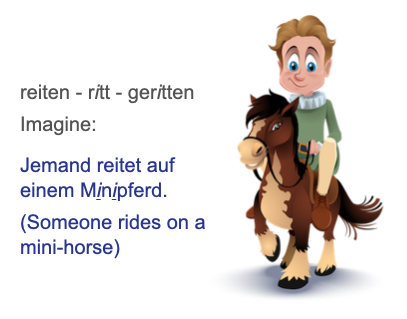 When you create such mental images, try to take into account the following points, for optimizing your memory:
N
bring in a lot of action to your mental movie theater!
N
use as many senses as possible – smell, hearing, touch, taste!
N
make sure your mental images are funny and unusual
N
link emotions to your mental images! Experience joy, fun, fear, sadness… (of course not all at once)
N
let the images properly unfold in your fantasy
N
take more or less 5 seconds for this
N
And …

Use flash cards by all means!

And not only when you want to learn irregular verbs, but basically for the learning of all vocabulary. It was proven since a long time ago that you can learn vocabulary in a much more intensive, and thus in a more  lasting way, with flash cards then simply from word lists.

These are the advantages:

Here is how you write your cards mnemonically right

Of course, in the end  it’s up to you how you want to write your cards. But if you want to apply the mnemotechnic presented here to the learning of German irregular verbs, I recommend simply copying me. Here is an example of how the flash cards for strong verbs such as “essen” (to eat) and “nehmen” (to take) would look like:

And also for our example-verb “nehmen” (to take):

I’m very excited about this method to learn irregular verbs.
Karin Bauer-Weisenstein from Switzerland
OK, in all this euphoria I have to admit: one has to be very creative to find a mnemonic key-word for a mnemonic example-sentence for every German irregular verb you have to learn. But this is not a problem either – I´ll let the cat out of the bag …

I have two solutions for you!

The mnemonic key-word doesn’t necessarily have to be German. You can even use any word of your mother tongue. The only thing that’s important is that the two first vowels sound the same as the German vowel gradations, which you have to learn. The meaning of the word doesn’t matter at all. In principle you can build in any noun you like in a mnemonic example-sentence. The only important thing  is that you remember the corresponding vowel gradations later!

The second solution is a real screamer:

For the following list of 107 irregular verbs, I have mnemonic example-sentences completely ready for you! Yep, that´s right!

I have two solutions for you!

The mnemonic key-word doesn’t necessarily have to be German. You can even use any word of your mother tongue. The only thing that’s important is that the two first vowels sound the same as the German vowel gradations, which you have to learn. The meaning of the word doesn’t matter at all. In principle you can build in any noun you like in a mnemonic example-sentence. The only important thing  is that you remember the corresponding vowel gradations later!

The second solution is really cool:

For the following list of 107 irregular verbs, I have mnemonic example-sentences completely ready for you! Yep, that´s right!

But it still gets better!

For this whole list of strong verbs, there are ready-to-use flash cards with mnemonic example-sentences! You only have to print them out and off you go … This way you can learn German in a much more relaxed way. 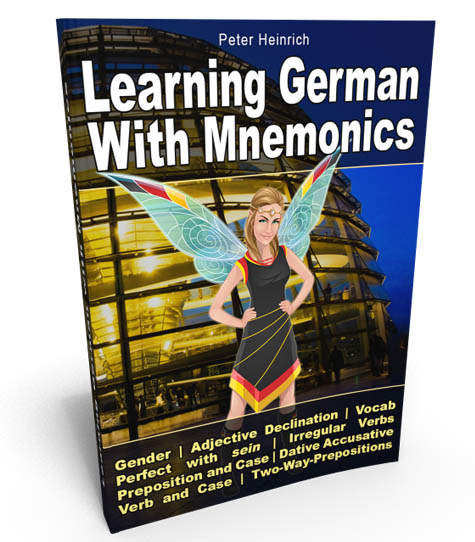 The mnemonic cards are only a small part of the new standard work for everybody who is serious about learning or teaching German:

For students AND teachers

Apart from many, many other themes of German grammar, you will also find additional super methods for learning German irregular verbs.

In this practice-ebook you will learn

N
the power of “micro-stories”, and moreover how the use of the city Paris and other symbols can be of invaluable help with the learning of irregular verbs. 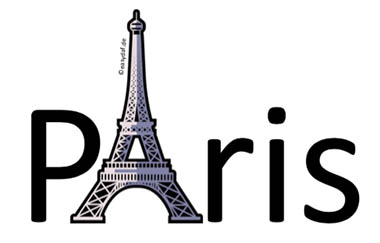 N
all the things a woman in a miniskirt has to do, just so you can learn German irregular verbs in a better way