It really can become a piece of cake, although Mark Twain was unfortunately right when he wrote:
Every noun has a gender, and there is no sense or system in the distribution; so the gender of each must be learned separately and by heart. There is no other way. To do this one has to have a memory like a memorandum-book.
Mark Twain: The Awful German Language
Now, apparently he managed to achieve it in some way, finally he did speak and write German excellently.
But let’s look again at exactly what Mark Twain said:

1. The attribution of the articles doesn’t make any sense – neither is there a system! Unfortunately this is true.

2.To learn the German articles, you need a super-memory („like a memorandom-book“). This is true as well! And here you will learn that you already have this super-memory; you only lack the right technique!

Many of you will now probably say: „Wait a moment, this isn’t right! There is definitely a system!“ Of course, you’re right, at least there is a „little system“, namely the so called gender specific endings. To avoid complicating it too much, we call them simply the „special endings“, which indicate the correct article.

Here are a few examples

The ending -or is alway masculine, thus „der„.

There are a few of these endings, although many of them have exceptions as well, and so there is an ongoing argument between linguists, which ones are special endings and which ones are not.

We don’t want to get involved in this argument, we will concentrate on a few endings, which really (almost) always indicate the correct article.

Many students of German have already come across „learning tips“ for German articles such as this one, in their textbook:

But honestly: Who is actually able to memorize these endings?

„Quasi“ is Latin, and means in English „how“. And that here is the Trick:

We arrange the syllables in such a way that we can pronounce them as a word. And for this we invent a short story together with a nice image.

And here is how it works:

This bacillus is responsible for the use of articles in the German language! Repeat this word slowly with me, until you know it by heart.

Do you notice, that the „Bacillus“ has a few prickles, like a hedgehog (German „der Igel“)? Remember this for later. It will help you to remember the first syllable: Ig-ling … This way it’s easier to distinguish this Quasi-word from the other ones. 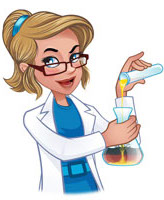 This woman is a scientist at the institution of
Heit-ung-keit-ei-schaft-tion-(i)tät-ik.

There she is researching to find vaccine against „den Iglingorismus“.

The word is fairly long, but don’t give up immediately! Pronounce it slowly, together with me, and keep repeating it, until you know it.

Imagine how cheerful (heiter) the woman is while working. That reminds you of the first syllable: Heit-ung-keit …
Finally, I want to introduce you to
das Tum-chen-ma-ment-um-lein

It will always be on your side in the future, and whisper the correct articles in your ear.

As you can see, this Quasi-word is again a lot shorter and therefore even more easy to learn.
And there we go again … 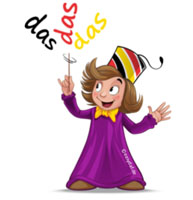 This little being frolics (tummelt) constantly in your vicinity, to help you. That way you will easily remember the first syllable: Tum-chen …

But what if there are no „special“ endings?

That’s too bad! With these nouns it’s impossible to detect the correct article by their ending. And let’s remember Mark Twain: „So one must learn the gender together with the noun, there is no other way.“

E
WHY is this actually so difficult?
E
HOW can you learn these articles IN A MUCH EASIER WAY?

In my eBook-package you´ll find the answers to these questions and a bunch more really smart tricks which will help you significantly with  learning German. 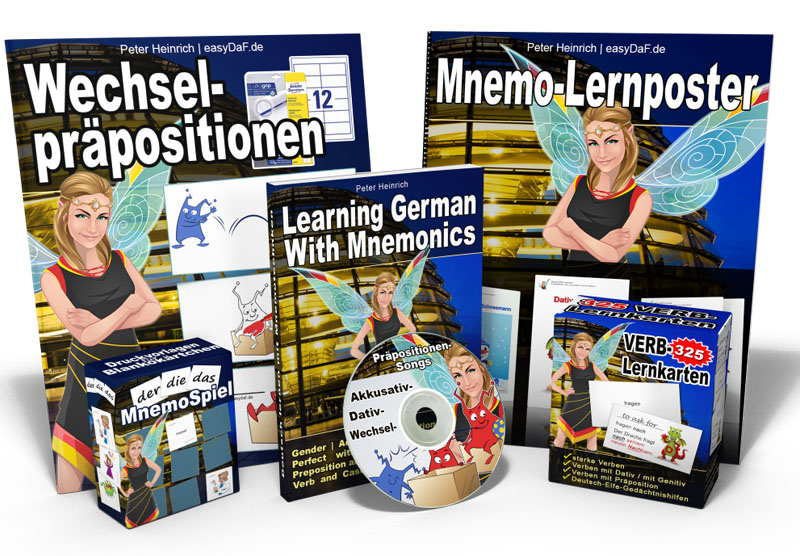 In this POWER-Learning-Kit for German grammar, you not only find everything about the learning of the articles, but also mnemotechnical learning aids for many, many other themes in German grammar. More …

Akkiz Coskun, teacher of German from Ediene Koleji in Turkey, has provided an outstanding method for the learning of the articles through the theme of body parts.

She uses a symbol for each article, and thereby visualizes the corresponding body parts:

And here is how Akkiz‘ students learn the body parts:

For the theme of clothing, Akkiz has developed a wonderful action-based method. The children put on the clothes, and wear the mask (of the baby or the monkey) which corresponds to the article!

With this lively method, the students obviously find it a lot easier to memorize the articles! Have a look for yourself:

Antonio Libertino is totally excited about the POWER-Learning-Kit“ to learn German. A short time after he downloaded it, he contacted me and showed me how one can learn German in a creative way with these materials.

In this short video, you’ll see a superb example of learning German in a creative way.

Antonio simply wrote: „Hello Peter, a bit of work, done with your materials…“ and sent me these outstanding tables for learning the German articles in all cases.

If, besides German, you want to learn Italian, have a look at Antonio´s great website of Antonio; I can strongly recommend this teacher. www.italianoinitalia.com